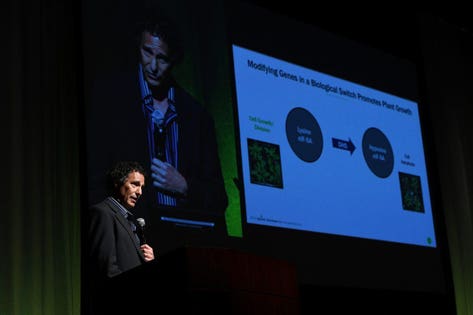 It’s no secret that crop biotechnology (GM – genetically modified, GE – genetically edited,…the USDA biotech glossary is here) is a hot topic. Biotechnology progress has and will continue to drive debates stirred by a confusing mix of mis-information, emotions, politics, and valid concerns. I find the space difficult to navigate, and I dedicate considerable time to reading, talking, and thinking about it. Dan Barber’s recent New York Times op-ed, “Save Our Food. Free The Seed.” continues to be a talking point. Around the same time as Barber’s article was published, Trump signed an Executive Order on Modernizing the Regulatory Framework for Agricultural Biotechnology Products.

Dr. Jerry Feitelson, CEO & Founder of Agribody Technologies, is one of my go-to resources for consumer-acceptance, policy, and crop biotechnology. As such, I asked him to share some of his wisdom with all of you. Back in May of this year, we chatted and answered live Q&A during Agrifood Conversations. I’ve written up a synopsis of that in a more formal, condensed interview form here, and added an updated conversation on the most recent policy developments in the space. Anyone who wants to view the full conversation can check it out for here.

Connie: You are one of the most passionate people about consumer education and GMOs that I’ve come across. Let’s start with your background as relates to this space.

Jerry: I personally participated in 3 waves of public concern about tectonic shifts in our ability to manipulate life in the lab, so I’ve been able to observe and learn a lot from the reactions to various technological breakthroughs.

I’m going to date myself a bit here – but when I was studying Molecular Biology at MIT, Boyer & Cohen first invented recombinant DNA – that was in 1973. I went on to get my PhD in Genetics at Stanford, and it was during that time that I had the privilege of working with Lederberg/Cohen on the molecular mechanisms of Bacillus transformation, and published a paper with policy implications proving that crude lysates of Staphylococcus containing drug resistant plasmids could efficiently transform Bacillus, demonstrating the ease of horizontal gene transfer across very wide taxons.

Then, wave 2, which I think is the one that gets the most attention, was “GMO 1.0.” I headed Molecular Biology at Mycogen for about 10 years, when most of the B.t. toxin genes were discovered, enabling insect and nematode resistance traits from B.t. to be inserted into crop seeds. At Mycogen, my group cloned, sequenced and patented most of the known B.t. toxin genes, resulting in ~$850 Mil IP valuation on a $1.2 Bil exit.  We thought we were the “white knights” saving the world from exposure to hundreds of tons of environmentally- and health-damaging synthetic chemical pesticides.  While our discoveries lead to many very important commercial transgenic crops and were very widely adopted by farmers throughout the world, the public pushback lumping insect resistance with herbicide tolerance into “GMOs” was surprising and very disappointing.

And finally, there’s wave 3 – genome editing. For me, this really started in 2016, when I launched Agribody Technologies to make targeted mutations in a key genetic regulatory switch that increases crop yields, abiotic stress tolerance and shelf life.  This increases 1) food security and 2) agricultural resilience and sustainability. I want to be very clear here – at Agribody Tech, we’re using genome editing with point mutants and deletions that could naturally occur without the addition of DNA from other species.  We know that this approach is not regulated as “GMO 2.0” in the US, Canada, Brazil, Argentina, Israel, Sweden, Japan and Australia, though very unfortunately and irrationally the European Union decided last year that simple genome edits are regulated the same as transgenic crops.  We still need to assure the public that genome editing is a simple and more precise method of plant breeding that extends what scientists have been doing for millennia.

Connie: So you know what you’re talking about. And, for our audience – quick disclaimer: Jerry very clearly is personally and professionally invested in further development of biotechnology. With that, I want to talk to Jerry a little bit about policy. Can you bring us up to speed there? Where were we, and where are we now?

Jerry: Certainly – I’d start off in 1975 with the formation of RAC (Recombinant DNA Advisory Committee.) Asilomar – this was the first time an entire field of scientists voluntarily paused research to assess real risks.

Then, in 1980, there was the Chakrabarty US Supreme Court case, which enabled patenting of GM organisms. Then there was another major case in ‘82 with Genentech and GM insulin that resulted in the first ever recombinant DNA product approval by the F.D.A.

In 1986 there was a Coordinated Framework for Regulation of Biotechnology, which was created in collaboration by the U.S.D.A., E.P.A., and F.DA., who worked together but each focused on their respective elements of environmental and health safety. Some significant regulatory events, from ‘87, through today included:

Connie: What does the June 11th Executive Order mean for crop biotech players in the US?

Jerry: Although the USDA had already nearly completed updating their process for regulating transgenic and genome edited crops, an Executive Order was issued on 11 June 2019 to Modernize the Regulatory Framework for Agricultural Biotechnology Products.  The intent is to compel all three relevant agencies (USDA, EPA, FDA) to modernize and better coordinate their processes with a particular focus on “bringing innovative and safe genome-edited-specialty-crop-plant products to the marketplace.”  Technology developers, seed companies, farmers, the entire food distribution system, and the public will benefit from having appropriate and harmonized science-based regulations in place with more clarity and predictability.

Connie: Switching lanes again – can you speak a little bit to where you see consumer trends going as relates to crop biotechnology?

Jerry: There is a popular mythology that “natural” is good, and the “local” is good. It’s important to distinguish reality from an overly simplified representation. Needless to say, there are many highly toxic chemicals produced naturally, and many extremely safe synthetic compounds.  There is no binary distinction – similar to transgenic crops where each trait should be evaluated on a case-by-case basis. I recommend that every reader of this article take the time to see the amazing 2016 film, Food Evolution, available on Hulu, iTunes, Amazon Video, Google Play and YouTube. It’s important to point out the environmental benefits of GE crops – we’re using much less insecticides and we’re able to practice no-till farming. Educating the consumer is a huge challenge, but I’m optimistic. In the early days of crop biotechnology we weren’t breeding for traits that mattered to the public. But now we’re starting to see crops bred for things like taste and nutrition and sustainability in addition to yield and pesticide tolerance. That will be very significant in continuing to move the needle towards consumer acceptance, I think.

To learn more about what Jerry is up to at Agribody Technologies, reach out to him at jerry@agribodytech.com.