Endovascular interventions are an integral part of the medical routine with 6 million procedures done worldwide annually. During the procedure, doctors insert a thin, flexible wire to navigate the catheter into the blood vessels to apply stents or remove blood clots.  In order to navigate the catheter precisely through the vessels, patients undergo X-rays during the procedure. 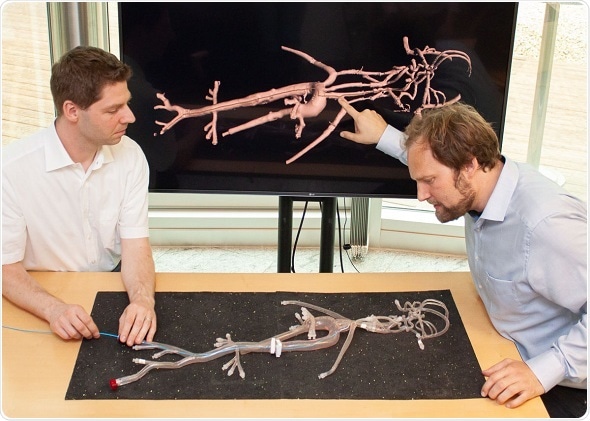 Inserting the intelligent catheter into the vascular system, the physician can observe the position in the virtual 3D model of the patient, now, as Torben Pätz and Jan Strehlow demonstrate here. © Fraunhofer MEVIS

One downside is that “patients and doctors are exposed to a considerable amount of radiation,” says Dr. Torben Pätz, mathematician at the Fraunhofer Institute for Digital Medicine MEVIS in Bremen. “In addition, the X-rays merely show a 2D projection instead of a 3D image, which can sometimes impede precise localization of the catheter.” Fraunhofer MEVIS is developing a system called IntelliCath (Intelligent Catheter Navigation) to remedy these problems.

The new method uses a catheter equipped with a special optical fiber containing tiny ‘mirrors’. When light passes through the fiber, the mirrors reflect a portion of the light. Whenever the fiber bends, the reflected light changes color. This is a key feature of the method, because sensors can then measure the change in color.

The signal from the sensors gives us information about the intensity and direction of the curvature. To some extent, the fiber knows how it is formed.”

An additional element is needed, however, for precise navigation through the vascular system. Prior to the procedure, physicians obtain CT or MR images of a patient. Based on this image data, software creates a 3D model of the vessel system and displays it on a monitor. During the endovascular procedure, live data from the fiber navigation is fed into the model. As a result, the doctor views the monitor to see how the device moves through the vascular labyrinth live and in 3D.

MEVIS experts have already been able to test the method’s feasibility using a prototype. “We connected several silicone hoses into a curved labyrinth,” says Pätz. “Then, we inserted our device containing an optical fiber into the labyrinth.” On the monitor, they were able to locate the catheter’s position in real-time with precision approaching five millimeters. The researchers have already applied for two patents.

Although several medical device companies also work on similar projects, “they expend a great deal of technical effort into trying to reconstruct the shape of the entire catheter, which can be up to two meters long,” says Pätz. “Our algorithm, however, only needs a fraction of the data to localize the catheter in a known vascular system.” As a result, the MEVIS approach promises cost-effective technology without special fibers and measurement systems and is less sensitive to measurement errors than previous approaches.

Next, the experts will test the IntelliCath system on both a full-body phantom of the human vascular system and a pig lung. Towards the end of the current project phase in 2020, a prototype will be ready to serve as a foundation for a clinical trial.

In addition, Pätz and his team are developing acoustic feedback to relieve doctors of the constant need to view at the monitor. The idea is to employ various indication sounds to signal how far the next vessel junction is and in which direction the catheter should be inserted. “It is similar to a car’s parking assistance system,” explains Pätz, “where you also receive acoustic indications about the distance to the next obstacle.”

IntelliCath is a part of the more comprehensive SAFE project (Software support and assistance systems for minimally invasive neurovascular procedures). Its goal is to support physicians by facilitating X-ray navigation during catheter procedures. For example, software can display supplementary information extracted from CT or MR images into the live X-ray image. Furthermore, AI will be able to automatically detect the position of the catheter. The project partners at the project group for Automation in Medicine and Biotechnology at the Fraunhofer Institute for Manufacturing Engineering and Automation IPA are developing an intelligent assistance system to support catheter procedures from support for manual navigation of the catheter to completely automatic navigation. SAFE is a Fraunhofer project with funding of 2.4 million euros. It commenced in April 2017 and will end in September 2020.

Sumitomo Dainippon Commits $3B toward Alliance with Roivant