At the same time, the American chestnut was a dominant tree in many forests of the US east coast and a familiar sight in forests, farms and cities. It’s estimated there were four billion chestnut trees in America at their peak. They could grow up to 125 feet tall and 16 feet wide and were so big that loggers sometimes used dynamite to blow them up into smaller pieces.  The species as a whole had a massive footprint. 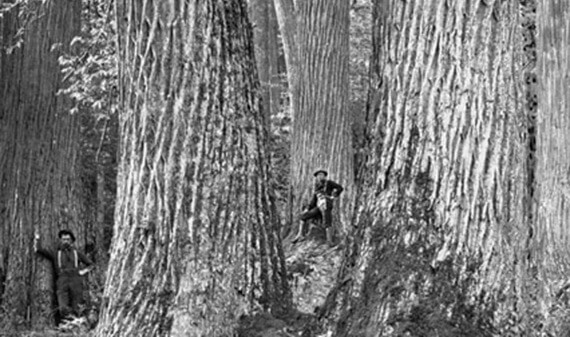 Then, starting in the late 1800s, chestnuts mysteriously started to die. Cryphonectria parasitica, an invasive fungus, infected chestnut trees with blight and reduced any new growth to a medium-size shrub. As Robert Frost wrote in 1936:

Will the blight end the chestnut?

The farmers rather guess not. It keeps smouldering at the roots and sending up new shoots.

Till another parasite shall come and end the blight.

Unfortunately, no new parasite has emerged to blunt the blight. Now, the days of easily finding “chestnuts roasting on an open fire,” as the song goes, are nearly gone. Any chestnuts available today are imported or raised through other species of trees.

In the early 20th century, elms likewise started falling victim to Dutch elm disease, caused by the Ascomycota fungi and spread by bark beetles. They are nearly gone from the US landscape, and are vanishing quickly from Europe’s. More recently, another disease known as elm yellows began spreading among native elms in the US and Canada, causing widespread death of trees. This new elm disease is brought about by phytoplasmas, bacterial parasites spread by leafhoppers or root grafting. Most native elms are susceptible to elm yellows and there are few resistant cultivars. 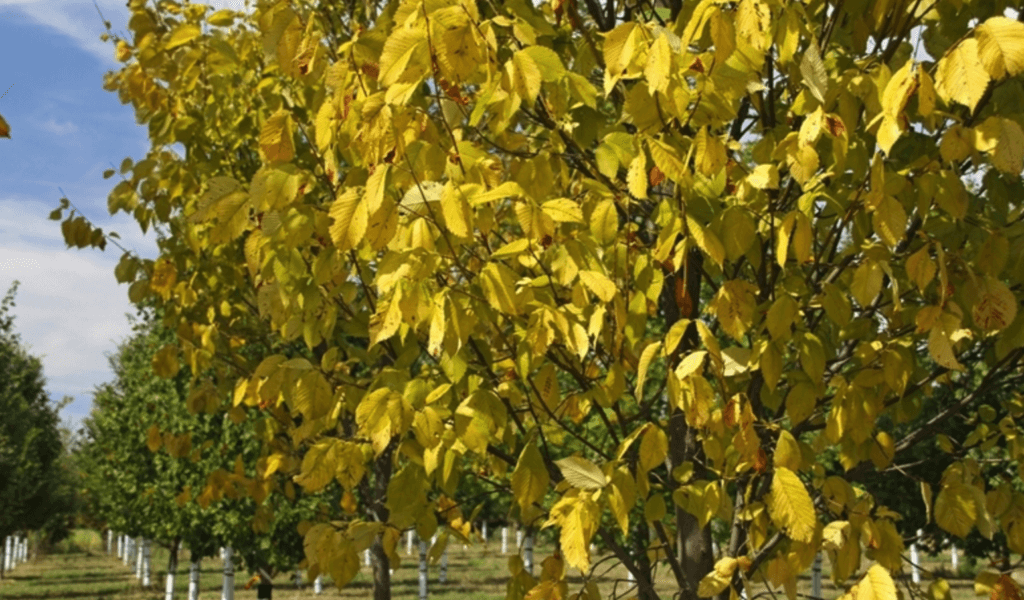 There is no cure for any of these diseases. Spraying bark beetles has not had any effect. However, researchers are looking at using genetic modification techniques, ranging from transgenic (GMO) methods to traditional breeding, and possibly CRISPR-Cas9 gene editing, to block the diseases or create resistant varietals. The American Chestnut Foundation (ACF) has bred hybrid trees resistant to the blight, but hasn’t made much progress. So ACF, working with various research teams and with broad support from the scientific community and industry, is developing genetically modified trees that contain genes from wheat and cauliflower, enabling them to resist the fungus.

Much of the groundbreaking American chestnut research has been undertaken by William Powell and his colleagues at the State University of New York’s College of Environmental and Forest Biology.

The focus on elms is relatively recent compared to the decades-long effort to save the chestnut. Where does that research stand?

Elm yellowing was probably introduced in the 1800s, but was often confused with Dutch elm disease until the late 20th century. It is equal in devastation to Dutch elm disease. Elm yellows, spread by leafhoppers or root grafting, is caused by phytoplasmas that infect the tree’s inner bark. Eventually, flow of water and nutrients are halted for the tree, and characteristic yellowing and wilting occur until the tree dies, usually within one or two years. U.S. trees appear to be impacted more severely than those in Europe and Asia.

Powell’s laboratory is just beginning testing on transgenic (so-called “GMO”) techniques that may help reduce elm yellowing, but no data are yet available. Given that previous recombinant work has not produced a well-favored, successful tree, the key to fighting Dutch elm disease and elm yellows might instead be CRISPR-Cas9.

Powell is hoping that genetic engineering will restore the elm, but the American Chestnut will be first to be evaluated by regulators. The initial GE tree, named “Darling 58,” owes its blight resistance to a single gene from wheat for an enzyme called oxalate oxidase (OxO). The recombinant tree, which took decades to develop, can pass on this trait through traditional breeding. In fact, Powell’s group has raised more than 10,000 such blight-resistant chestnuts, to be used for reforestation projects that will return the tree to the wild.

At the end of 2019, Powell petitioned the USDA for “non-regulated status,” the way the federal agency determines if a new agricultural product can be introduced publicly. The proposal is now open to the public for a 60-day comment period. According to Powell’s petition:

Oxalate oxidase is a common enzyme found in all grains, several other crops and food products, and many wild plants and microbes. OxO and other enzymes that detoxify oxalate function as natural defenses against the effects of specific pathogens that produce oxalic acid. OxO is well understood and has been studied for over 100 years. There are even functionally similar genes in Chinese chestnuts, which may partially contribute to the blight tolerance observed in these trees.

These efforts shouldn’t be controversial, as we are talking about saving species using variations of techniques used in breeding for hundreds of years. Yet, it has stirred the ire of environmental advocacy groups opposed to biotechnology in general, some of which have taken to sabotaging field trials of modified trees as part of their anti-GM work.

The Campaign to STOP GE Trees is an international alliance of organizations that united in 2004 to stop the release of genetically engineered trees, claiming without evidence that GE tress would have”ecologically and socially devastating impacts.” According to Anne Petermann, coordinator of the campaign and executive director of the Global Justice Ecology Project:

Geneticists, farmers, foresters, ecologists, agronomists and other experts have issued declarations against GE trees. Activists have cut down GE tree field trials in several countries. Just between 2015 and 2017 almost half a million people signed onto or submitted letters calling for a full rejection of GE trees around the world.

Petermann, along with Rachel Smolker of Biofuelwatch, also part of the anti-GM tree coalition, warn that “The release of GE AC into forests would be a massive and irreversible experiment. The introduction of GE AC could not only fail, but also create new problems and exacerbate existing pressures on forest ecosystems.” They argue the project represents a “Trojan Horse” that would open the gates to regulatory approval for genetically engineering trees for profit.

Regulations in most of western Europe (and significant parts of North America) abide by the precautionary principle, which dictates that one must presume a GE method is hazardous, and each gene insert must be proven safe and effective. An almost virulent anti-biotechnology sentiment has been adopted by some international organizations, particularly those affiliated with the United Nations. The UN Convention on Biological Diversity has voiced its opposition to all genetic modifications of trees:

Recognizing the uncertainties related to the potential environmental and socio-economic impacts, including long term and trans-boundary impacts, of genetically modified trees on global forest biological diversity, as well as on the livelihoods of indigenous and local communities, and given the absence of reliable data and of capacity in some countries to undertake risk assessments and to evaluate those potential impacts, recommends parties to take a precautionary approach when addressing the issue of genetically modified trees.

Are there environmental and socioeconomic “uncertainties”? Research has been ongoing for more than a decade, and few scientists believe there are insurmountable challenges, let alone serious dangers. The ACF, Powell’s group, tree biotechnology company ArborGen, biotechnology company Bayer, Duke Energy, government agencies, and other entities including the Forest Health Initiative and the Institute of Forest Biosciences are deeply invested in advancing the use of biotechnology for forest restoration, and possibly, ultimately, for lumber. Support from industry groups has caused a split in the tree conservation community. According to the Christian Science Monitor, two board members of the Massachusetts and Rhode Island chapter of the American Chestnut Foundation, which supports Powell’s tree restoration genetics work, resigned over the belief that lumber interests may eventually guide the rescue projects.

William Powell’s laboratory wrote in 2018 that they believe the opposition is more ideological than scientific:

The highly politicized, regulatory system for GE crops is an extremely poor fit for the realities of most forestry programs, and this situation has been exacerbated by international conventions.

Researchers are awaiting a response from U.S. regulators for approval to breed their trees with non-engineered relatives and plant them in forests. If the USDA denies “non-regulated” status, that could potentially kill the project. But, “If the regulators approve the request, it would be ‘precedent setting’—the first use of a GM tree to try to restore a native species in North America, says Doria Gordon, lead senior scientist at the Environmental Defense Fund (EDF) in Washington, D.C. But deciding whether to unleash a GM tree into the wild could take years.”

Andrew Porterfield is a Contributing Correspondent to the Genetic Literacy Project. He is a writer and editor, and has worked with numerous academic institutions, companies and non-profits in the life sciences. BIO. Follow him on Twitter @AMPorterfield

Some rectal cancer patients can safely avoid an aggressive operation