Researchers from the biotechnology company Novavax in Gaithersburg, Maryland, have developed a vaccine against severe acute respiratory syndrome coronavirus 2 (SARS-CoV-2) that successfully induces immunogenicity and protection against the virus in macaques.

The vaccine was produced from the full-length SARS-CoV-2 “spike” protein that the virus uses to bind human receptor angiotensin-converting enzyme 2 (ACE2) and gain access to host cells.

Crab-eating macaques (Macaca fascicularis) immunized with the vaccine developed anti-spike antibodies that blocked the binding of the spike to ACE2 and prevented the animals from developing respiratory infection and pulmonary disease.

The authors say the findings support ongoing phase 1/2 safety and immunogenicity studies of the vaccine – NVX-CoV2373 – which is already under evaluation in clinical trials.

A pre-print version of the paper is available on the server bioRxiv*, while the article undergoes peer review.

A safe and protective vaccine is urgently needed

Following the first cases of coronavirus disease 2019 (COVID-19) that were identified in Wuhan, China, late last year, the causative agent – SARS-CoV-2 – swept the globe and was declared a pandemic by the World Health Organization on March 11th, 2020.

Currently, there are no preventative treatments, and a safe, protective vaccine is urgently needed to control the virus, which has now infected more than 22.5 million people and caused more than 790,000 deaths.

The NVX-CoV2373 vaccine developed by Novavax has already been shown to induce high titers of anti-spike immunoglobulin G (IgG) that block viral binding to ACE2 and neutralizes wild-type virus in mice and non-human primates. In mice, the vaccine also protected against SARS-CoV-2 challenge, without any evidence of vaccine-associated enhanced respiratory disease developing.

Furthermore, the vaccine-induced CD4+ T-cell responses of the cytokines IFN-γ, IL-2, and TNF-α that were biased towards a T helper type 1 cell phenotype and generated antigen-specific B cells in the spleen.

The vaccine is currently undergoing evaluation for safety and immunogenicity in clinical trials. 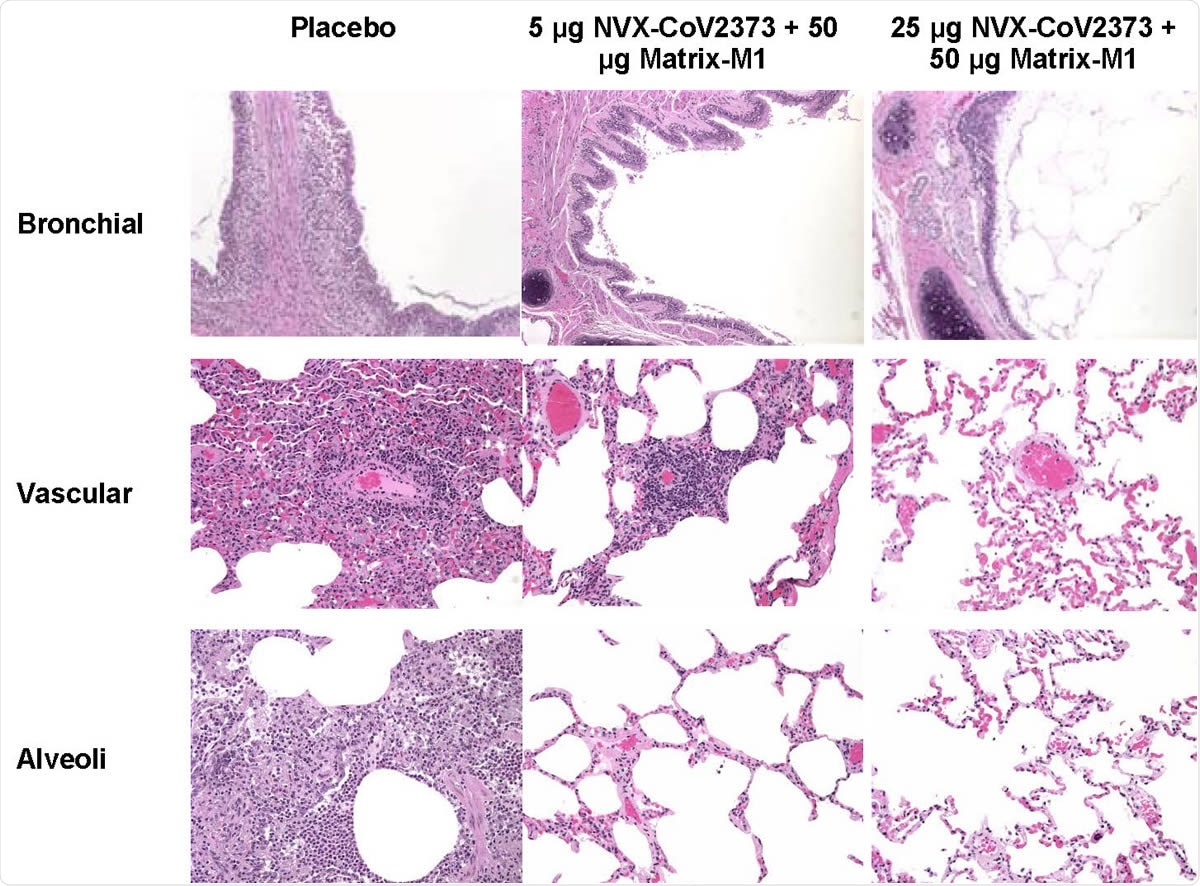 Representative histopathology of lungs from NVX-CoV2373 vaccinated cynomolgus macaques challenged with SARS-CoV-2 (WA1 strain). Histological findings of representative placebo treated animals included eosinophils expanding the mucosa of the bronchi, perivascular mononuclear infiltrate, with mixed macrophages and neutrophils within the alveoli at 7 days post infection. In the 5 μg dose group, one animal had mild to moderate perivascular infiltrate while other animals had no remarkable findings. There were no remarkable histological changes in the bronchial, vascular or alveoli in animals vaccinated with 50 μg NVX-CoV2373. There was no evidence of exacerbated lung inflammation in NVX-CoV2373 immunized animals.

What did the current study involve?

For the current study, Gale Smith and colleagues assessed the vaccine’s immunogenicity, blocking of ACE2 binding and generation of neutralizing antibodies in macaques and compared the findings with those among people who had recovered from COVID-19.

In macaques challenged with SARS-CoV-2, the team also assessed whether the vaccine had any protective effect against viral replication in the respiratory tract and whether it had prevented pulmonary disease.

Antibody titers were higher in macaques than in recovered patients

Macaques immunized with a boosted regimen of low dose (2.5μg) vaccine along with 25 μg of Matrix-M1 adjuvant and those immunized with higher doses (5.0 and 25.0 μg) and 50 μg of adjuvant all developed anti-spike IgG by day 21.

This was seven to 14 times higher than the IgG GMT of 23,614 detected in blood taken from convalescent humans.

The ACE2 inhibition titers in the macaques for the corresponding vaccine doses were 649, 1,410, and 1,320, which was five to 11 times greater than in convalescent sera.

In addition, SARS-CoV-2 GMT neutralizing antibody titers in the macaques ranged from 17,920 to 23,040, which was eight to ten times higher than in convalescent sera.

No detectable viral load in any immunized macaques by day 4

Next, the team tested the efficacy of the vaccine in macaques challenged with SARS-CoV-2 in the upper and lower airways.

Control macaques that received a placebo had 9.131 virus single (sg) RNA copies/mL in bronchoalveolar lavage (BAL) fluid two days following challenge. Among immunized macaques, on the other hand, no detectable sgRNA was found in BAL, apart from in one animal that received the low-dose vaccine and that macaque cleared any replicating virus by day 4.

“Importantly, vaccinated non-human primates had little or no detectable replicating virus (sgRNA) in either upper or lower respiratory tracks,” said Smith and colleagues.

Finally, analysis of lung tissue collected from the animals seven days following the SARS-CoV-2 challenge showed that the control macaques had moderate-to-severe inflammation in the bronchi and mixed infiltrates of neutrophils and macrophages in the alveoli.

Among the vaccinated animals, on the other hand, there was little or no inflammation.

The vaccine could help to establish herd immunity

“Here, we report the immunogenicity and protective efficacy of a SARS-CoV-2 subunit vaccine (NVX-CoV2373) produced from the full-length SARS-CoV-2 spike (S) glycoprotein,” say the authors.

A 20-Year Journey to Nail Down an Undruggable Cancer Target