An international team of researchers has shown that a mutation within severe acute respiratory syndrome coronavirus 2 (SARS-CoV-2) – the agent responsible for the coronavirus disease 2019 (COVID-19) – enables the pathogen to evade antibody-mediated immunity while maintaining replication fitness and increasing viral loads.

The researchers showed that a variant in the viral spike protein called N439K enhanced binding affinity to the human host cell receptor angiotensin-converting enzyme 2 (ACE2) and resulted in immune escape from a panel of neutralizing monoclonal antibodies (mAbs) and from the polyclonal sera of recovered individuals.

The team – from the United States, Australia, Scotland, England, Italy, Switzerland – says the findings have important implications for reinfection, vaccine development and therapeutics.

“Immune evasion mutations that maintain virulence and fitness such as N439K can emerge within SARS-CoV-2 S [spike], highlighting the need for ongoing molecular surveillance to guide development and usage of vaccines and therapeutics,” said Gyorgy Snell from Vir Biotechnology in San Francisco, California and colleagues.

A pre-print version of the paper is available on the server bioRxiv*, while the article undergoes peer review. 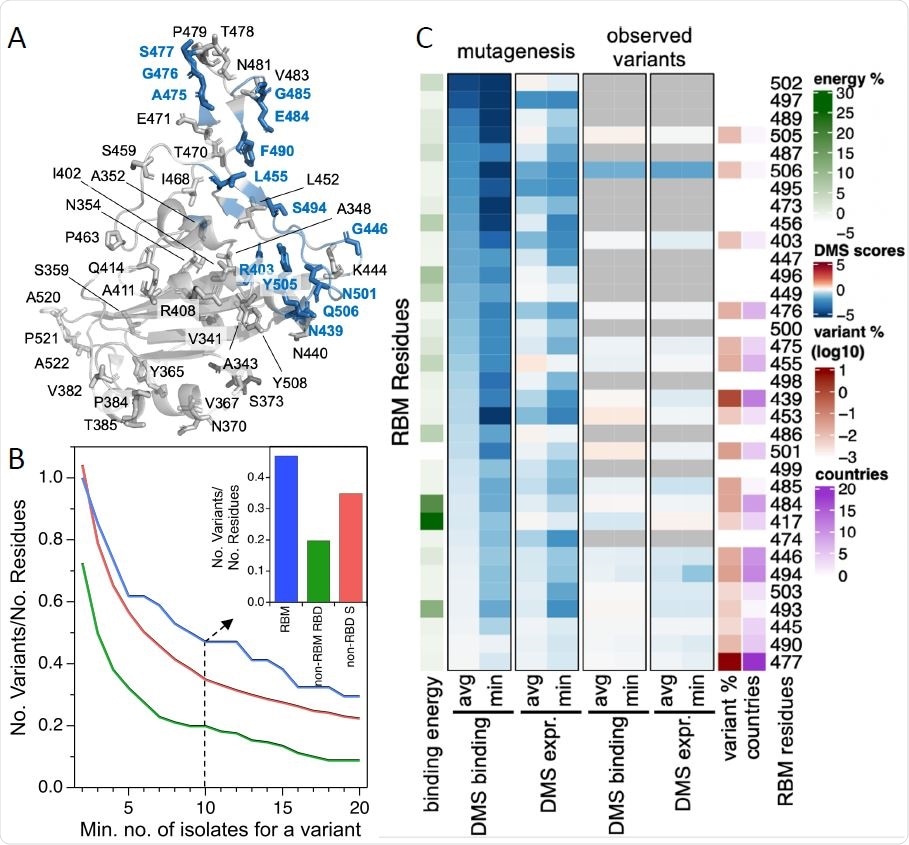 The RBM exhibits significant natural diversity in circulating SARS-CoV-2 isolates (GISAID, Oct 7, 2020, n≈130,000). (A) RBD variants with a minimum of 10 observed isolates in the RBM (blue) and outside the RBM (gray) mapped onto an X-ray structure of the SARS-CoV-2 RBD (PDB ID: 6M0J). (B) Number of observed variants in three non-overlapping S regions (RBM, non-RBM RBD, non-RBD S) normalized by the total number of residues in each region, where the number of observed isolates required to define a variant is varied. Inset: barplot representation where at least 10 isolates are observed per variant. (C) Heatmap of Deep Mutational Scanning (DMS) hACE2 binding and expression data for RBM residues (Starr et al., 2020). DMS score is the binding or expression fold change over WT on a Log10 scale. Aggregated DMS data is shown for each residue by taking the minimum (most disruptive variant) or the average score across all possible variants of a residue, except for the reference residue and the stop codon (‘mutagenesis’ columns). Alternatively, minimum and average scores are computed only across variants that have naturally occurred (‘observed variants’ columns). When no natural variants have been observed, cells are grey. The heatmap is annotated with frequency of non-reference amino acids in deposited sequences (at least 4 sequences were required to call a variant), in Log10 scale; number of countries in which a variant was observed; and percentage of total binding energy between RBD and hACE2 computed from an X-ray crystal structure. Data were sorted on the leftmost DMS column.

Genomic sequences help track spread and evolution of the virus

Since the first cases of COVID-19 were first identified in Wuhan, China, late last year (2019), more than 135,000 SARS-CoV-2 genomic sequences have been made publicly available via the GISAID Initiative.

The spike protein is the viral structure that is targeted by neutralizing antibodies following infection or vaccination and by the mAbs that are being tested in clinical trials.

Studies have shown that the spike variant D614G, which is now dominant across most of the globe, may have greater infectivity, while maintaining efficient spread and virulence, say Snell and team.

However, amino acid 614 lies outside of the spike’s receptor-binding domain (RBD) – the region targeted by most of the neutralizing antibody activity that occurs in the serum of people who have survived infection.

“Initial studies suggest that D614G actually exhibits increased sensitivity to neutralizing antibodies, likely due to its effects on the molecular dynamics of the spike protein,” write the researchers. “Therefore, this dominant variant is unlikely to escape antibody-mediated immunity.”

Nevertheless, as the number of SARS-CoV-2 infection cases continues to rise, the greater the likelihood that new variants will emerge that could impact on vaccine and therapeutic development, they add.

Now, Snell and colleagues have examined the SARS-CoV-2 receptor binding motif (RBM), the primary target of neutralizing antibodies within the spike RBD.

The team showed that the RBM is the most divergent region of spike and less conserved than the RBD or the entire protein.

To understand how this structural plasticity might influence immune evasion, the researchers investigated the clinical and epidemiological impact, molecular features, and immune response to an RBM variant called N439K.

The N439K mutation, which is the second most commonly observed RBD variant globally, has arisen independently twice and, in each case, formed genomic lineages of more than 500 sequences.

The team found that this variant had repeatedly emerged through convergent evolution, had spread to multiple countries and had significant representation in the SARS-CoV-2 sequence databases.

The variant also resulted in immune escape from a panel of neutralizing mAbs and from polyclonal sera from a significant proportion of people who had recovered from infection.

Worryingly, one of the mAbs the variant was resistant to is currently being tested in clinical trials of a two-mAb cocktail.

“If circulating viral strains already carry resistant mutations to one antibody in the cocktail, this could reduce the cocktail to a monotherapy,” say Snell and team.

“The fitness of N439K is consistent with our findings that the RBM is the most divergent region of S [spike],” write the researchers.

They say this divergence suggests that SARS-CoV-2 is capable of accommodating mutations in the RBM, while retaining ACE2 binding affinity.

“The ability to accommodate mutations in the RBM indicates a high likelihood that immune-evading SARS-CoV-2 variants compatible with fitness will continue to emerge, with implications for reinfection, vaccines, and both monoclonal and polyclonal antibody therapeutics,” says the team.

The researchers warn that RBM variants must be evaluated when considering vaccines and the therapeutic or prophylactic use of mAbs.

“Long term control of the pandemic will require systematic monitoring of immune escape variants and selection of strategies that address the variants circulating in targeted populations,” they conclude.

Video: ‘One more tool in our toolbox’: The case for crop biotechnology – Genetic Literacy Project

Video: ‘One more tool in our toolbox’: The case for crop...

Heroes and Villains: Reflections on the CRISPR Revolution