SEOUL, South Korea and ANAHEIM, Calif., March 16, 2022 /PRNewswire/ — Chang Il-Moo, who successively served as the head of R&D department at the Korea Ginseng Corporation (KGC, CEO Kim Jae-Su), won the 2021 Duke Award, the top writing award granted by the American Botanical Council (ABC), for A History of the Korean Ginseng Industry (2021), the first book in 50 years in the English language on the history of Korean herbal medicine. 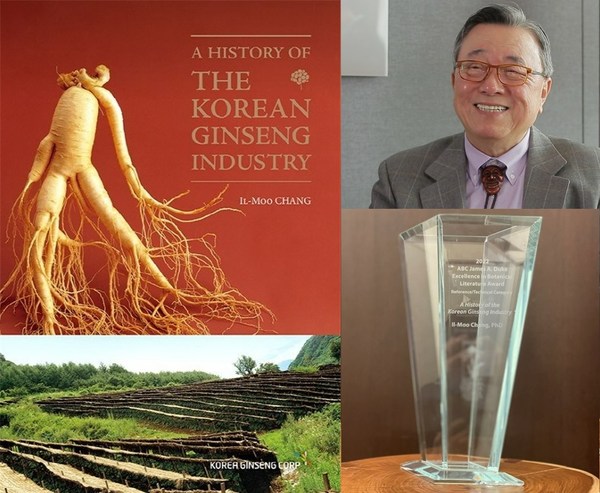 Chang Il-Moo, a former head of R&D department at at the Korea Ginseng Corporation(KGC), wins James A. Duke award from the American Botanical Council

Chang, also a professor emeritus at the College of Pharmacy at Seoul National University, was given the 2021 James A. Duke award by the ABC on March 9 during the award ceremony held at the Anaheim Natural Products Expo West 2022 in California.

The ABC, also known as the Herbal Medicine Institute, is a U.S. nonprofit dedicated to supporting researchers and scientists around the world developing medicinal plants for various uses. The James A. Duke award is given to the best herbal book of the year.

A History of the Korean Ginseng Industry is an English edition that was translated from the original Korean edition published by KGC CheongKwanJang Books in 2018 and updated with the latest content. This work is highly valued for being a rare English book on ginseng that came out about 50 years after Korean Ginseng, published by the Monopoly Bureau of Korea in the early 1970s.

A History of the Korean Ginseng Industry sheds light on the history of the Korean ginseng market starting from the Joseon era (1392-1910). In the book, Chang proves that Joseon farmers were the first in the world to artificially cultivate ginseng and store it in the form of red ginseng. Red ginseng is made by steaming and boiling fresh ginseng.

Professor Chang explained, “A History of the Korean Ginseng Industry describes the industrial history of Korean ginseng, a specialty and economically important crop of Korea.” He added, “This award reflects the international acknowledgment of the history, industrial significance, and values of Korean ginseng.”

Asieris to present a study protocol of APL-1202 in combination with BeiGene’s tislelizumab as neoadjuvant therapy（NAC）for muscle invasive bladder cancer (MIBC) patients at 2022...

Everest Medicines Enters into a Global Licensing Agreement to Develop and...